Are you having a good day? Feeling pretty good about the world? If so don't read Amnesty's report on British attitudes towards rape (or my post about it), because it is, as you would expect, really, really depressing.

Amnesty asked 1,000 people about what level of responsibility they believed a woman had for being raped when the woman was in a number of different situations. Here are the results: 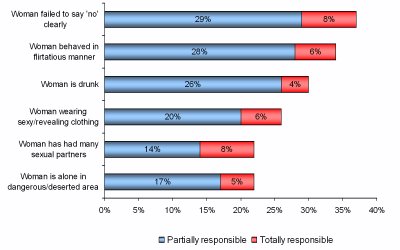 This all makes me feel sick, and unsafe. I find the idea of anyone, but particularly a man, thinks that women are ever even a tiny bit responsible for being raped absolutely terrifying.

But the bit that made me most sad was that if a woman doesn't say no clearly enough 37% of people believed that she was in some way responsible for being raped. Those are the options, you say no, or you don't say no.