If You Want Higher Wages Let Me Tell You What To Do... 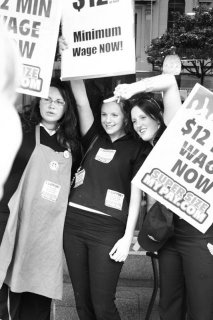 Today's heros are obviously the Starbucks workers who went on strike today. You can find out all about it at SuperSizeMyPay.com, and there's been a tonne of media coverage, including the lovely John Campbell, although I missed the beginning, unfortunately.

The Starbucks CEO wouldn't appear on Campbell Live after throughly embarassing herself on Nine to Noon this morning, I strongly recommend giving it a listen. She was proud that the 'only' had 77% turnover, and talked about their tiny, tiny margins they had on a $5.50 cup of coffee. Linda Clark did a thorough job of making fun of her, and when a scab is making fun of your labour relations policy you know you've got some problems.

One question that Linda Clark asked Matt McCarten is "if they don't like it why don't they just leave?" It's a question that always drives me nuts. As well as being down-right offensive when it comes from someone earning as much as Linda Clark does, that question fundamentally misses the point. Employers aren't God, deciding from on high what workers are to be paid, workers have a right to bargain, and bargain collectively.

Span and No Right Turn, both wrote about it. I'm sure a whole bunch of nutty right-wingers did as well complaining about how workers weren't just putting up with being exploited and this is an affront to capitalism - but I try not to read too many right wing blogs, so I can't report.