People Racism
I guess everyone has read the stories. The guys chanting 'We grew here, you flew here'. The woman's whose head scarf was pulled of and used as a trophy. What I hadn't realised until I started paying attention was how organised and planned it was. People sent around text messages calling for Leb and Wog bashing day, which was why there were 5,000 young men on a beach getting drunk and being a mob.

Some of them were neo-nazis, but many were not, at least in the organised sense. That young working-class white men blame their problems on non-white people, is a sign of how much the left has failed. But it didn't happen in a vacuum.

He assured his audience he "understood" why that famous text message went out and he read it right through again on air: "Come to Cronulla this weekend to take revenge. This Sunday every Aussie in the shire get down to North Cronulla to support the leb and wog bashing day …"

Daily he cautioned his listeners not to take the law into their own hands, but he warmed to those who had exactly that on their minds. On Thursday Charlie rang to suggest all junior footballers in the shire gather on the beach to support the lifesavers. "Good stuff, good stuff," said Jones.[....]

When John called on Tuesday to recommend vigilante action - "If the police can't do the job, the next tier is us" - Jones did not dissent. "Yeah. Good on you John." And when he offered a maxim his father had picked up in the war - "Shoot one, the rest will run" - Jones roared with laughter. "No, you don't play Queensberry's rules. Good on you, John."

Meanwhile tabloid journalism also spent a week setting up last weekend as a battle of the beach:

A sample of the headlines in the Sydney tabloid the Daily Telegraph, gives a flavour of the campaign. On December 6: “Fight for Cronulla: we want our beach back”. On December 7: “Gangs turn Cronulla beach into war zone”. The gangs referred to were not, of course, local surf gangs and racist groups, but rather “thugs of Middle Eastern descent”. Last Friday the Telegraph’s front page screamed, “NOT ON OUR BEACH: Cronulla police vow to defend Australian way”. Throughout the week, letters to the editor on the issue—a number of which were critical of the newspaper’s coverage—were published under the subheadings, “Let’s make it safe to go back to the water” and “Let’s unite to fight this shame on the beaches”.

More generally, this is a problem provoked by groups of young Lebanese men. Why do they - apparently more than youths of other ethnic groups - have such difficulty coming to terms with normal Australian life? Unemployment may be one reason - migrants from Lebanon have one of the highest jobless rates of any ethnic group. For Lebanese Muslims there is the additional alienation brought about by being members of a high-profile minority religious group, one which feels itself under threat in the current security panic. Publicity about Lebanese gang activity and sex crimes has also put the community under pressure, to the point where young men of Lebanese background feel defensive, and correspondingly aggressive, towards other Australians. This may explain - though it does not excuse - regular outbreaks of boorish behaviour which have been reported regularly, and which came to be so resented by Cronulla residents.

Or this from Andrew West:

Australia does not have a race relations problem. We have a clash of cultures and that's a big difference -- and maybe the problem is certain forms of Islam.

I wonder what he'd think would be a race relations problem, if a 5,000 strong mob attacking anyone who looks foreign isn't it.

Political Racism
This also happens in the context of an incredibly racist government. This was John Howard's reaction:

“I think it’s important that we do not rush to judgement about these events,” he declared. “I do not accept that there is underlying racism in this country ... it’s also important that we place greater emphasis on integration of people into the broader community and the avoidance of tribalism within our midst. I don’t think Australians want tribalism. They want us all to be Australians.”

Howard continued: “I think yesterday was fuelled by the always explosive combination of a large number of people at the weekend and a large amount of alcohol plus an accumulated sense of grievance, the full extent of which I don’t pretend to know.”

I think Allan Moir cartoons nicely summed up the relationship between the Howard government and the riots: 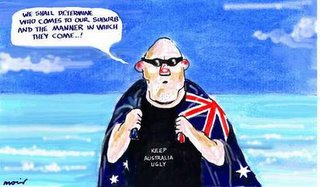 A riot like this is the result of divide and conquer politics, and it's that underlying cause that we must respond to. Not just in Australia, but in New Zealand as well, since we're not short of the root causes.

I'd highly recommend reading the World Socialist Website's coverage on this, here and here. It's very in depth, and covers the wider issues very well. Also I found most of Morning Report's Coverage horrendous, but Linda Clark's regular interview with her Australian Correspondent was quite interesting.