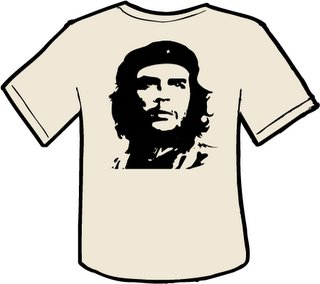 Doesn't mean You're a Communist.

I do a lot of leafletting, and other forms of harassing passers by. I have random theories about leafletting (refusals always come in threes, your last leaflet is always the hardest to give away); I'm even quite good at it. But one of the things that sustain me while leafletting is hating people who are wearing Che Guevara T-Shirts but refusing my leaflets (which are always on things Che would support). They're a reasonably common occurance, and if you're a Che Guevara T-shirt wearer who ignores politics, you have no idea how much people curse you.

A Washington Post article about the commodification of Che as reprinted in the Dominion Post this Saturday. I really loathe the way that picture has been used, and see it as the ultimate example of style over substance. Even actual communists I know who have worn Che T-shirts haven't been able to tell me why it is Che, in particular, that they're wearing on their chest.

I think I have a solution. The picture should be licenced so that everyone who wears a Che Guevara T-Shirt has to participate in any protest an actual left-wing activist tells them to, or give a good Marxist reason why not.