I'm not geeky enough to have ever been into comics. However, I'm more than geeky enough to lay my hands on Serenity: Those Left Behind the comic that bridges the gap between the TV Series and the Movie.

Which made me realise that it wasn't the fact that I'm not geeky enough that made me not into comics, it's the fact that I find the way comic book girls are drawn terribly distracting and so I can never get into the story.

This is what Inara looks like when played by Morena Baccarin: 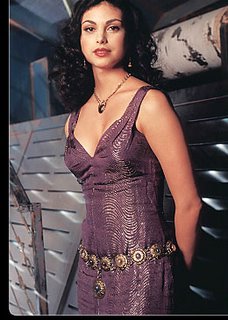 She's both beautiful and conventionally attractive (although that dress is hideous, but that's another matter).

Here's what Inara looks like when a comic book artist draws her: 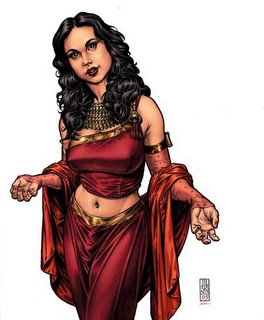 Now she looks like she's had breast implants and had several ribs removed.

It wasn't just Inara, Zoe got her waist winched in as if she was wearing a corset under her combo gear, and River must have bra of steel, the way we can see her breasts under the loose clothes she wears. Kaylee was, if anything, drawn a little shapeless. So if the artists are told (and I'm sure they were) that Kaylee couldn't look like a comic book girl, they don't know how to make her look like a woman.

Television is not well known for portraying a wide variety of body types (Kaylee is described in the Pilot script as Zaftig, which is a whole nother issue I'll rant about sometime), but each of those characters is played by an actual woman, with an actual body shape. The fact that Will Conrad couldn't draw the limited range of women's bodies that are acceptable on TV is really depressing.