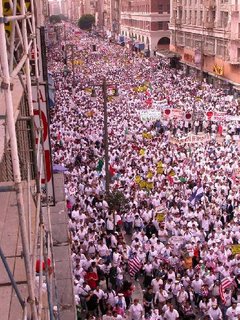 Los Angeles saw one of it's biggest protests ever yesterday when between half a million and a million people marched against anti-immigration laws. The laws would make it a felony to be an illegal immigrant, and calls for walls to be built along the border. I understand they're due to be debated in the Senate on Tuesday.

The mobilisation against this legislation all over America exceeded media expectations (although the organisers seem to have known how important it was to people). I'd like to pay tribute to everyone who atteneded those protests, and particularly those who put in the organising work to make it happen.

I think it's easy to get complacent about this issue in New Zealand, to assume that just because it's difficult for illegal immigrants to get here, immigration is less of an important political issue here. We get the occasional high profile refugee case. The most famouse is Ahmed Zaoui, an Algerian who was detained for a number of years, after he was given refugee status, because the SIS didn't like him. Or when the government sedated a 16 year old girl in order to deport her back to Sri Lanka where she had been repeatedly raped by her family and feared the repercussions (she has since been given refugee status, and is going to Canada). But although dawn raids to get rid of illegal immigrants still happen, more people probably know the band than the practice.

Businesses exploit illegal immigrants, and it is the immigrants who are punished if the businesses are caught. Last year one bakery was caught paying one of their employee's below the minimum wage and not providing him with holidays for 8 years. He was deported, they were fined $2,000. Employers have huge amounts of power over illegal immigrants, and the only way to change that is to say that those workers should be entitled to live here under the same conditions as everyone else.

I think it's fantastic that it is a people's issue in America, although I imagine it's not for good reasons. My sister met a US border guard at a party (he had brought his border guard badge with him to New Zealand, which was probably the first sign of trouble), he said his job was to shoot Mexicans.

In New Zealand at the moment, the only people who talk about immigration, are people who want it restricted, or businesses who want workers. It's obviously different in America, you don't get hundreds of thousands of people on the streets to promote business interests. I think it's really important to draw a line between people who support a more open immigration policy to suit the needs with business, are confused with people who think that immigration policy should suit the needs of people (so there should be no limits on immigraton)From the Guardian:

Bush sides with business leaders who want to let some of the estimated 12 million undocumented immigrants stay in the country and work for a set period of time. Others, including Senate Majority Leader Bill Frist, say national security concerns should drive immigration reform.

By making immigration a tap that gets turned on and off to suit the labour market, employers can try and drive down wages and conditions by treating workers in other countries as a reserve army of labour.

So all power to the protesters, and I'm sure they'll continue to draw a line between those who put people first, and those who put business first, as well as fighting the racist fucks who put up legislation like that up in the first place.

If you live in America and didn't make those protests you get another chance, there's a national day of action on April 10, you can find out more at the immigrant solidarity network.

Also posted on my blog