One more thought about nazis

A couple of days ago I read about two 13 year-old blonde twins who Pam at Pandagon described as the Olsen twins of the white pride movement. Apparently they go around singing songs about how much better white people are than anyone else. It was creepy, but I don't have anything interesting to say about it besides - creepy.

But then I was randomly looking at different New Zealand blogs and I saw that David Farrar had a different response. He posted this: 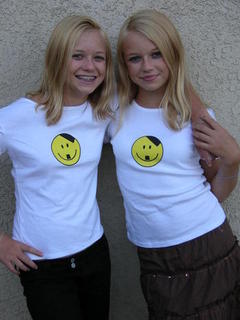 Under the headline 'What a Waste'.

The commenters seems to agree with him: "They are good looking though...", "Their parents should be ashamed of themselves. I wouldnt mind giving them both a proper seeing to!", "Of course I read that they are also 13 years old... so the idea of giving them some is a tad too early :)"

Yes it is such a waste when 13 year old blonde twins whose sole role in life should be to service men, either in fantasy, or reality, ruin that possibility.

The idea that David Farrar, or any of his cronies, might spend time around any actual flesh and blood women terrifies me.