I've been reading about Dove's "Love your body" campaign on various feminist blogs. The campaign has finally hit New Zealand and it makes me hideously depressed and incredibly angry

The short version is that using these women: 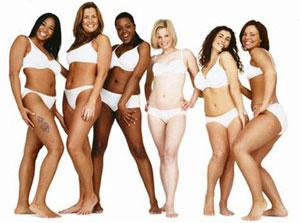 to advertise cellulite cream is apparently some kind of great step forward for women everywhere, an advertisement for type II diabetes, or an insightly intrusion on men's right to control their visual environment (unfortunately I'm not kidding - see the kick ass Wendy for more details).

Most of what needs to be said about this campaign has already been said by feminists in Britain, America and Canada, where this campaign has been run. But what surprised me was my own reaction. I hate those ads with a passion - I probably hate them even more than I hate the guy who complained about how he didn't want to see chunky women in their underwear, or the guy who said the only time he wanted to see thighs that big was on chicken.

I hate it when capitalism pretends to sell my politics back to me. Because if it can be sold to me, it's not my politics. The purpose of these ads isn't too make women feel better about their bodies - it's to make them buy cellulite cream. By definition if you're buying cellulite cream you don't feel OK about your body.

Like I said it's all been said before so I'll end by quoting my favourite statement from the debate, from a feminist blog from Cardiff:

"What really bothers me is not the fact that the Dove campaign is not radical, it is the frightening probability that, in the context of our current culture, this campaign is extremely radical. As feminists, this is what we should be worried about."