What is the same about the Invasion of Iraq and the Civil Rights Movement?

They were both about oil except the Civil Rights Movement?

They were both borning movements except for the War on Iraq?

When Condoleeza Rice and Jack Straw took a three day tour of her home-town: Birmingham, Alabama No, they came up with a slightly different answer:

Mr Straw said the example of America's southern states would help to "counter this unbelievably condescending view that there is a chosen people across the world, mainly white, who are capable of enjoying democracy, and there is the rest who are only capable of living in tyranny".

There are some important distinctions between the Civil Rights Movement and the Invasion of Iraq: one was a coalition of grass-roots organisations attempting to improve their own lives by challenging the power structures, the other was a state action, involving force, that has killed tens of thousands

I'll let you guess which is which, but in case I have any readers half as dense as Jack Straw I'll leave some pictures as clues. 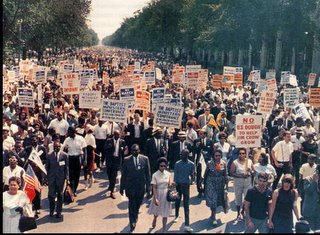 I did think of a straight answer by the way: they were both inspired by God - strange God.