Ode to television (or possibly my dorkitude - probably both)

I love television. Well I actually don't love any particular form of television at the moment because it's all crap, but I love the format. In particular I love scripted single-camera 22-episode season television (half-hour or hour doesn't really matter as long as it's not a sitcom). I think I prefer television to movies. At least if I was going to a desert island and told I could have 5 hours of moviing pictures then I think it'd be mostly TV (off the top of my head - Buffy, more Buffy, probably Freaks and Geeks and possibly Dick).

So I'm a philistine and no-one needs to take me at all seriously, but I have my reasons - I love serial storytelling. We don't do much serial storytelling in print anymore, well we do, but it's not very satisfying. We have novels series, but you either have to wait an inordinate time between installments, or the books really suck (although I do think the serial storytelling is a huge part of the appeal of Harry Potter). Unfortunately the only place where writing is serialised more often than yearly is in the women's magazines (oh and the babysitters club). I may not like Dickens or Thackery, but I'll concede they're probably better writers than most of the people who write for women's magazines.

All this means if you want real serialised story-telling, where the updates come regularly you have to go to television. And I do want serialised storytelling, because it has the most amazing potential for emotional resonance.

Once I get about half-way through I finish books all in one go (if it's a good book). I stayed up till 5am a couple of weeks ago finishing David Hilliard's autobiography (I do this thing where I refuse to look at the clock, on the grounds that if I don't know how late it's getting it won't count). Most forms of media are either designed to be absorbed in a single session (like a movie or an album) or the author really has no control over how they will be absorbed, but are generally designed to be absorbed as one piece (like a novel).

The last episode of Freaks and Geeks is an excellent example of that. Lindsay goes off to chase the dead, Nick dances disco and Daniel plays Dungeons and Dragons. The reason this gave me a feeling of such hope was that I knew these characters.

To use a smaller example at the end of the Prom on Buffy - where Jonathon gives her the umbrella, and Angel comes and dances with her. Those moments work because you know what she's been through the last three years - you know what this means, you know who Jonathon is (although not what he will be - but telvision shows turning to custard is not the current topic).

It's a hard medium to write, and sometimes the plot suffers, as the writers lose track of where they are or it just doesn't work. But for me, what it can do for resonance and characters means that I'm OK with some of the plot problems (although not the Initiative - that was never going to be good). The characters grow and change over time with you. I think that's probably most powerful when you're watching high-school shows, either in high-school or soon after. Because then the resonance with your own life is really immediate (and I may have been 22 when Freaks and Geeks came out - but Lindsay was way smarter than me when it came to her life). But I've loved characters who were 5 years younger than me or 25 years older.

When it works, when an episode of television is acutally saying something, and it also tells you new things about these characters you care about, and funny it's and exciting and well constructed it just feels so right, so satisfying. That's my favourite sort of story-telling.

The other thing I love about serial storytelling is that it is a very social art-form from the viewing end. Part of the whole episodic nature means that you share it with other people - you talk about it with other people, because you're waiting for what is going to happen next.

Which is all just a long way of saying I don't think anything ever put to film will ever mean as much to me as this: 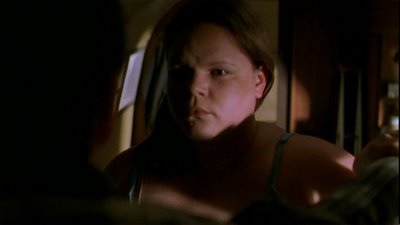 Makes me cry every single time, and I couldn't tell you why without talking for about fifteen minutes about my life, Buffy, my feelings about feminism and how those three subjects have over-lapped over the 6 or so years I watched that show.

But the problem is that just as I think episodic television has such great potential, I also know that there is no other medium where it's more unlikely that any show will fulfill that potential.

In some ways it's partly because episodic story-telling is hard, particularly because there are so many people involved in a television show, that's so many different places where things can go wrong. 22 episodes of TV a year is a lot of writing - too much for one person without burning out, so you need a staff of writers, and some of them aren't going to be that good. Then even the best showrunner gets caught in how much they like the sound of their own voice and get over-important(I'm looking at you miracle snow).

But mostly the problem with episodic television is money. There is no medium where money is more important, and more corruptive. Partly this is because TV is really expensive and so there are all sorts of restrictions, and heaps of people put their oars in. The production company and the network all have notes.

The major problem is that television isn't made for viewers, it's made for advertisers. Which makes it the most compromised medium, in terms of what people can say. It makes it a conservative, and reactionary medium.

Which is why it's the place where people have miscarriages rather than abortion, where you can build a whole show around jokes that go: "men are like this; women are like this", why Kaylee is their idea of a larger woman, why everyone, even the poor people, seems to have enough money, why cops are glorified and why David E Kelley, king of misogyny gets hundreds of thousands of shows to spurt his hatred.

It sucks, because when it's good, it's really good. I haven't watched a good show in a while. Not one that it was worth making an effort to make sure you don't miss it, and unless you're that involved it doesn't really matter. My friend's kind of fond of Grey's anatomy - and I'm warming to it (they had the most sympathetic character refuse to cross a picket line, which made me like it more), but there is a fundamental problem of it not being very good. It treats the audience like they're kind of stupid (there's this whole sequence with a bomb in a body, and the main character is told by the bomb squad guy to imagine he's someone she likes, and rather than just trusting that this woman can act and we'll know that she's think about Dr McDreamy*, they take us to a white lit scene with her talking to the guy she has a crush on - because otherwise we wouldn't have got it.).

So the actual point of this post, besides to give people something to mock me with, and articulate some thoughts I've had for a while (I don't think I've explained it very well - I think only people who know what I mean will understand what I'm saying, but oh well), is that I'm excited.

Aaron Sorkin has a new show called Studio 60 On the Sunset Strip, and I'm excited about it. It seems to have a really good cast, it has Bradley Whitford who was easily my favourite thing about the West Wing, and it has Sarah Paulson who was the holograph woman in Serenity and Vicki in Down With Love (or as I described her to my friend 'You know that woman we really like, and whenever we see her we're all - she's really cool')

Now it'll have some problems (starting with the fact that Aaron Sorkin can't write women - a fact that is slightly mitigated by the fact that can cast actresses who can play women - however they're written), but he knows how to write television. Is it dorky that I'm excited about that? (if it is I won't tell you that when my friend and I were imagining things we wanted to have happen in the future "another Joss show on telvision" was quite high up the list).

*I'd just like to point out that I didn't make up that nick-name. The show did. I don't think he's McDreamy - I think both Meredith and his wife should leave him because he's an ass.