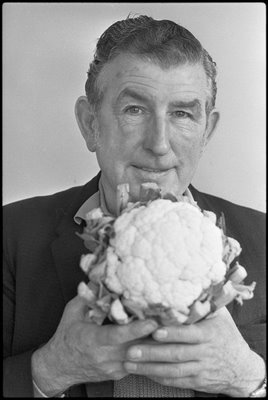 Ernie Abbott was the caretaker at Trades Hall, the Wellington Trade Union building. This picture of him was taken for the Evening post. The price of cauliflowers had leaped from 50c to $1.40, and as a member of the caretakers and cleaners union Ernie Abbott was protesting this increase. This was the time of wage and price controls and a government spokesperson had described cauliflowers as a luxury.

He died on 27 March 1984 when someone left a bomb in a suitcase at Trades Hall.

It was a bomb for the unions, no doubt about that. There was a Wellington Trades Council meeting that day to plan a campaign against Muldoon. The police never found the person who left that bomb.

I didn't know Ernie Abbott, but I know people who were at Trades Hall that day, people I wouldn't know if they'd been the ones who picked up the suitcase.

Today someone left an empty suitcase outside Trades Hall - it got blown up by the bomb squad. I've no idea why someone would do something like that, do they think it's funny to remind people of times a comrade was blown to smithereens? But what got me was the media coverage.

No-one called it terrorism. The caretaker of a building was blown up by a bomb planted against a political movement - and they didn't call it terrorism.