As I've said before, abortion law in New Zealand is an awful mess and I have a life-long goal to dance on the grave of every man who voted for it. But abortion practice, at least in the major cities, is better than in many countries that have laws that are based on women's rights. The main reason for this is a public health system which pays for abortions.

But I want to talk about the inequalities in abortion system, and I thought I'd start with the geographical inequalities. This is a map of New Zealand's provision of first-trimester abortion services*: 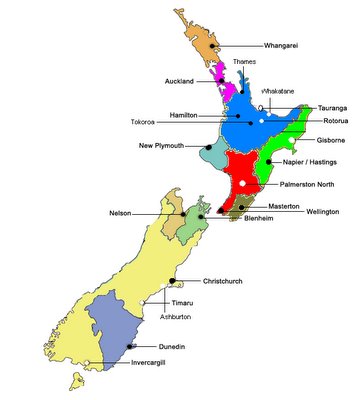 The black dots are towns where you can get abortion services - the colour blocks are areas where those abortion clinics, or hospitals serve. The way the health system works the if a District Health Board (DHB) doesn't wish to provide a service itself (and there are two DHBs with no hospitals licensed to perform abortion in the area - presumably on general grounds of ickiness) then you purchase it from somewhere else. So unless you're prepared to pay both for the abortion and the trip to Auckland to go to the only private abortion clinic in New Zealand, you go where your DHB sends you. So, despite the fact that the people of Dannivirke are far closer to Hastings than they are to Wellington, they have to make the 4 hour drive to Wellington and back to have terminations (probably twice, because it usually takes two appointments - more on that later).

Incidentally just because these places do provide abortions doesn't mean that you'd necessarily want to go there - New Plymouth hospital only performs abortions under general anesthetic, that sounds like a great starting point for health care.

The current situation is awful, and puts women in a position of real hardship. The West Coast DHB only provides help travelling to Christchurch if a woman has a community services card. If you live with flat-mates and work full-time, even if you're only on the minimum wage, you're not eligible for a community services card. So women with minimum wage jobs have to find the money to make it from the West Coast over to Christchurch (although they should be able to get help from Work and Income).