The sun was shining as I sat down at the Cenotaph. Like most war memorials it looks like a giant penis. No-one else was there, but I was I knitted a few rows, and the mother of kids I used to babysat for walked by. We talked a bit, mostly about knitting and she left. I knitted a few more rows; no-one else showed up. I packed my knitting away, and walked off. For ten minutes, I'd vigiled alone in solidarity with the people of Iraq.

That was the political action in Wellington on the fifth anniversary of the War on Iraq. Maybe the people who had called the vigil turned up after I left, I don't know. It's been a hard six months for many of us here - there are extenuating circumstances

But it's not just here, the movement against the war in Iraq was at it's peak in the first six months of 2003. I own this book: 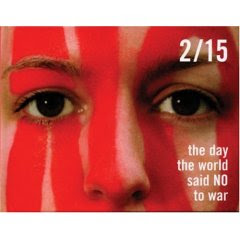 I've always loved it, I flick through and look at the sea of placards in London, the shivering scientists in Antarctica, the incomprehensible naked demos and the mass of people in Santiago. I think back to what we were doing on the fifteenth of February 2003, and what a crazy chaotic time it was, and how much we managed to do.

But tonight, I thought different things at I looked at the photos of the young woman in Sydney who had written 'Make Love Not War' written on her arm and was making out with an equally young man; the school kids on strike in London, on the first day of the war; the soccer fan who ran on the pitch with "Stop Bush" written on his backs; the hundreds of windows in Milan with peace flags flying; the two women in Washington DC who had written Peace Womb on their pregnant bellies - their children would be five by now. I want to know where they all were on Thursday, the fifth anniversary.

I think we, by which I mean the anti-war movements in the broadest sense, must have done something wrong, not to be able to build on that hope that existed in those months. I can tell you some of the specific things that I would do differently in Wellington. But those details are too specific to explain the world-wide shrinking in the anti-war movement (unless every anti-war group had massive disagreements around meat).

The fifteenth of February 2003 was amazing, but a war cannot be stopped in one day, even one day with millions of people. Anything we do must be sustained longer than the period where urgency overwhelms us. I think the question for those of us who took part is how we can build, next time.