Happy Valley - you may have heard of it. Solid Energy want to build a mine there, various people don't want it built so they chain themselves to chain tracks and the like. I've had friends involved with it at various times; I've made fun of the snails and kibitzed in the way activists do when they have absolutely no interest in organising for a cause, but know they could do better.

Sometimes my kibitzing turns to anger, as it did when I saw the Save Happy Valley forum that was organised last week in Christchurch "A Future without Coal"

I don't object to the idea of the forum - there's going to be a future without coal, since one day the coal is going to run out. What I object to is whose opinion is considered relevant to that future. The speakers were:

The speaker on the local impacts of coal mining doesn't even get a name, unlike professors and political leaders. More importantly, how can you organise a forum about the future without coal without including coal miners front and centre? The first, the most important questions, when discussing a future without coal should be about miners and mining communities. Miners have struggled for generations to build what they have today.

Makes me want to make a badge like this to wear: 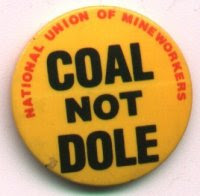