Why The Hospital Lockout Matters

Any time 1,000 workers get locked out it's important that we win. The fight for a single pay scale for service workers in the hospitals is an important one. Raising the starting rate of these low-paid workers to $14.25 an hour would be a great victory. But this is also a fight against contracting-out, and it's a fight we have to win.

It's a vicious way of keeping wages and conditions down, and the only way workers can fight it is by organising. Hospital workers in the SFWU have fought really hard to get this far. An agreement with the DHBs, and all but one of the contractors is a huge step forward. But it will be meaningless unless they can get Spotless to agree to the same terms and conditions, otherwise Spotless will be able to undercut other companies up and down the country, and wages will go on a downwards spiral again. 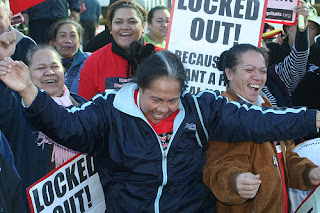 Or, what she said: