I was driving the South Island last week, which meant I saw a lot of small towns. Small towns may have lost a lot over the last few decades, but the one thing you can be sure to find is a war memorial: 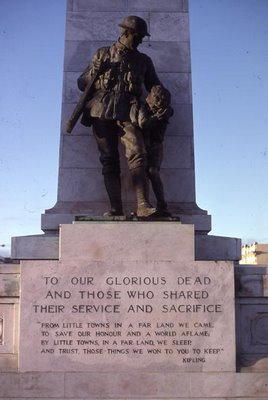 Exactly who the glorious dead would have been was made clear to me when I reached my destination. I was heading to Dunedin to pick up my sister from university, and when I got there I met all these 18 year old boys, one of them looked acted very much like my brother. I am reasonably certain that none of them will be sent to war. They will not be told lies about the glorious empire to get them to sign up; they will not conscripted into uniform; and it seems unlikely that poverty will drive them to their army. But their grandfathers and great-grandfathers weren't so lucky, and those men would have been just as funny, just as silly, just as obnoxious, just as young.

Theirs war was not the war to end all wars, and never could have been. So I'll mark this armistice day with a song from another war, a song I can rarely listen to without crying:

Look at those slanted eyes coming up over the hill
Catching us by surprise, it's time to kill or be killed

Over here, over there, it's the same everywhere
A boy cries out for his mama before he dies for his home

If only we'd meant it when we'd said "Lest We Forget"