A while back there was a debate running feminist debate about the website Go Fug Yourself. I think part of the problem is that the debate was framed as a question of whether or not it was funny. Arguing about humour is a very difficult place to analyse media. I don't think there is any possibility of developing a feminist line on whether or not Go Fug Yourself is funny (for the record my position is 'maybe'). I would also never argue that feminists shouldn't read and enjoy Go Fug Yourself. As I've said I'm all for things that give us joy, and very few things produced under capitalism are going to be politically pure.

But we can't stop criticising things just because we enjoy them. Just because feminists find Go Fug Yourself funny, just because it's written by women who identify as feminists (and I'm pretty sure at least Jessica does) doesn't mean that the site is feminist - and I believe that it is the opposite.

There are some areas of the patriarchy (for want of a better word - I have to write a post about why I dislike that term) that women do the primary policing over. Making sure an oppressed group polices itself is a pretty central part to maintaining any power system. You grow up female in our society you know that women are supposed to police conformity when it comes to food, appearance and sex.

That's not to say that men don't have a role in policing all of these. Men can say "Should you be eating that?" to their girlfriends (if they want to risk the possibility that I will kill them when I develop the lazer powered eyes I've always wanted), but it's other women who will tell them how many calories, or how much carbohydrate, where to find the diet version, and to brush their teeth instead.

I think stopping policing other women's behaviour to suit our sexist and misogynist society is a vital precondition for feminists doing anything useful.

Go Fug Yourself polices other women's appearances - yes they're celebrities, but New Weekly concentrates on policing celebrities, doesn't mean it doesn't have a message for the rest of us. They did about Kelly Clarkson recently: 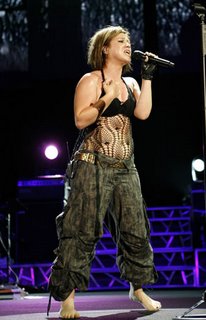 Now I'm not going to defend the outfit saratorially. But to say (as Go Fug Yourself did) that Kelly Clarkson should avoid wearing outfits that make her look like a pear, or that she's twenty pounds heavier, or that she should make sure that she wears clothes that are flattering. That says it's OK not to look like Keira Knightley (and don't even get me started on the way they write about women who may be suffering from eating disorders, because I'm too angry to be coherent on that), as long as you make sure you don't look any heavier. You have to make sure you 'flatter' yourself.**

The policing on Go Fug Yourself is funnier, more intelligent, and kinder than what you find in women's magazines. But that doesn't mean that the readers don't take messages from it about the way they should dress, it's still part of the work women need to stop doing about policing other women's appearance.

* I know they occasionally target men, but it's rare enough to be irrelevant. There's not a single man who gets a category for himself and they haven't fugged a man yet this month.

** I have this excellent top that looks fantastic on me - so excellent that I'm considering buying a couple more, because it comes from Pagani and it's not going to last. I never realised how loaded the term 'flattering' was until my feminist friends talked about it and refused to use that word.