Riley was the anarchist

I promise that this will be the last time I write about the Buffy comic books until the book is actually released in March. I'd also like to say that while I'm definately a fangirl - I'm not quite as single-minded as I may seen - I've thought about many (well several) other things besides the Buffy comic book recently. I do have two

I've decided to buy the comic, no matter how much the art-work offends me. This is from a recent Joss interview about the theme:

In a way, it’s a larger answer to the same question. And the question is, why are people afraid of powerful women? Why is misogyny streaking through every single culture? Why is the world like that? The world is not as it should be, and Buffy has now created a bunch of people with enormous power who kind of realize that. And the people who realize they realize that are not pleased about it. She’s answering the question that I answered with Buffy; she’s confronting it directly and on a global scale. Not that it starts with her picketing and that she’s become activist girl. She’s still fighting demons, but she’s starting to realize that there is more wrong with the world than just a bunch of monsters.

I'm pretty sure I can deal with some pictures that say 'no girls allowed' for that story.

But what I really wanted to write about was an comic that's been put out called Buffy: the anarcho-syndicalist:

The story unfolds much like that of a typical Buffy episode, with our "proletarian heroes" rescuing innocent people from the clutches of various evildoers (Klansmen, fascists, and capitalist vampires).

My first question is: Did these people even watch the show? The Wish? Anne? Buffy's rescued innocent people from the clutches of people expropriating their labour before.

Then there's the image: 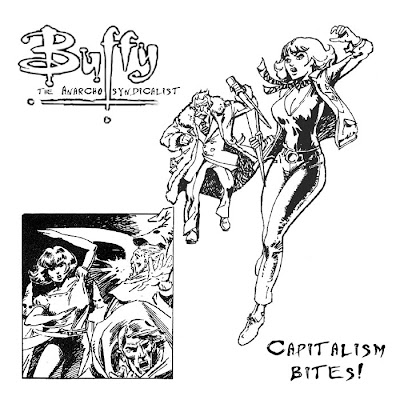 I wish I was surprised. I wish I didn't know exactly what the art work would look like before I clicked on the link. I wish I was a little bit less used to left-wing men who think they're so cool, radical and alternative, and yet make it really clear that they don't really give a shit about anything but their cool, radical alternativeness.