Aotearoa is not for Sale: Demo report 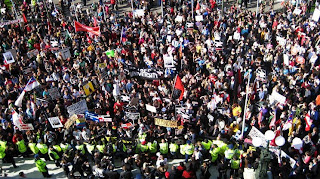 4,000 people marched in the hīkoi 'Aotearoa is not for sale'  Friday (this is some of them).

I joined from a feeder march from the university.  We were worried we weren't going to meet up properly.  The first thing I saw was flashing police lights - which said the hīkoi wasn't far away.  Then I saw people two blocks away turning into Willis St and there were just more and more of them - by the time we reached the    hīkoi the front was already in Lambton Quay.  There were just so many people.

I wanted to see how long it went back from there so I started walked backwards against the demo. I said hello to friends, my sister, acquaintances, more friends, people who I thought were overseas; I went past a brass band, many lots of chanting, and still people kept coming.  This was the biggest march I'd been on since the Foreshore and Seabed  Hīkoi in 2004.

I was on Wakefield St before I could see the end.  I hadn't been planning to count it, even though I'm a wee bit obsessed with counting demos - it was too big.  But having seen so many people I wanted to be able to put a number on it.  So cutting corners and walking fast, I got all the way to the front again (by this time the front was half-way down Lambton Quay.  I counted out a hundred in groups of ten, and got a good sense of what 100 people looked like - then I counted people in groups.  About 37 groups of 100 people walked past me - and by the time we got to parliament it was more - as some could only come for their lunch break.

Watching everyone walk past I realised just how huge a group of 4,000 people is.  The different bits of the demo had a very different feel.  The very front was singing, and chanting faded in and out as people passed.   There were groups behind different signs - focusing on issues in specific communities - the meatworkers were well represented.  There were also some very cute kids (with and without signs).


The hīkoi was led by Maori, and Tino Rangatiratanga flags made a really clear statement about the issues being fought for.  I've been on Maori led protests with only a smattering of tau iwi.  I've also been on plenty of protests that were organised and dominated by Pakeha and made no effort to acknowledge tangata whenua (including many, many that I've been part of organising).  This was something slightly different than either of those things.  Maori led the  hīkoi, and framed the issues around Tino Rangatiratanga, and tau iwi accepted that leadership and framing - because we believe that our interests are best represented by being part of that fight.

I spent much of the time once we'd actually got to parliament trying to find out was speaking.  This was quite a difficult mission.  The sound system they had didn't work and people were trying to speak to a crowd of 4,000 through a mega-phone.  Earlier on, at the Vic feeder march - you could barely hear the speeches that were given through a megaphone when there were 100 of us.  It's a fine experience for those giving the speeches, organising the speeches and the first few rows - but a rally without a proper sound system just breaks up the protest for everyone else.  It is no longer a collective experience.  Either acknowledge that your sound system isn't good enough and focus on a very few chants - or get a sound system that'll allow everyone to hear speakers.  Anything else is actually disrespectful to the vast majority of people who came - by not having a good sound system and still giving speeches you're telling them they don't matter (and I should say I've been part of organising protests that made this mistake on many occasions - and it is only the few times that we've got it right that I've realised how important it is)

In this particular case, it was probably good.  The list I managed to build up was:

Someone who had been part of organising the hīkoi
Grant Robertson (apparently David Shearer was giving a speech to the Wellington Chamber of Commerce)
Russel Norman (obviously this filled me with joy)
Hone Harawira
Winston Peters (!!!!!!)
Someone from the Meatworkers Union (I was sad to miss this)
I heard one woman's voice, but I couldn't figure out who she was
Te Ururoa Flavell

I'll talk about the politics of this in a second, but at the time (no-one was giving two minute speeches - so the talking - which I couldn't hear - went on and on and on) I began to believe that the plan was to keep talking until everyone had left.

The political nature of the  hīkoi is a little harder to analyse.  Demonstrations are inherently incoherent events - and the larger a demo is the the larger standard deviation is.  On this demo one guy had two flags on his flag pool - the first was a tingo rangatiratanga flag.  The second was not a flag I'd seen before.  It was white and had the union jack in one corner, there were crossed shotguns on it, with a crown on top of it - and it had 'union power' written on.  I can't make those symbols make a coherent message - but it must have meant something to him.

There has already been quite a lot of radical political analysis of the hīkoi. Valerie Morse argued for the importance of anti-capitalist politics. Kim at He Hōaka responded with the importance.  And since Friday, Shomi Yoon has a post on ISO's blog has a demo report.

'Aotearoa is not for sale' (a name I hate incidentally - currently Aotearoa is for sale - saying something that is patently false has never seemed like a good strategy for me) is centred around resisting current attacks. It opposed: "privatisation of public services, sale of public assets to private investors (local AND overseas), casualisation of labour, privatisation and pillage of our country's resources."  I really appreciate the the posts I mentioned above each are focused on linking the current attacks with critical understandings of society.  In order to successfully fight - we need to understand how the world works and that means naming colonialism and capitalism.

I want to highlight a point of Shomi's "The xenophobia that’s represented by NZ First leader Winston Peters will be absolutely damaging to the campaign. It is a problem that an openly reactionary party like NZ First felt comfortable endorsing the hikoi." While the fact that no-one heard him takes a little of the sting out of the fact that he could talk .  Some of the campaigning material has been xenophobic - emphasising 'foreign ownership' as if that was particularly.   The false 'we' is a real danger -  supposedly left-wing people have suggested there's something progressive about a consortium led by Michael Fay buying farms.   The right have been emphasising the idea of "Mum and Dad" investors.  If those who oppose privation use xenophobia - then it is easy for the right to brush off those criticism with examples of New Zealand investors.  If we attack privatisation in its our totality our criticisms are much harder to refute.
My contribution is more prosaic. The protest was amazing - getting 4,000 people together is an amazing achievement.  However, it is not enough.  As John Key has already made clear - he can ignore it.  One massive protest isn't enough.  Organising is about growing and maintaining pressure.  If we want to effectively fight the current attacks - and push for a better world - we need more than one massive protest. 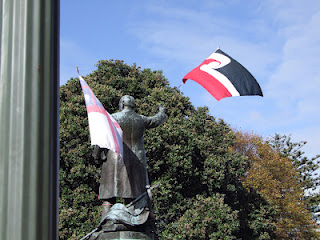 All the best protests enlist Seddon in their cause.