While the details of the Ports of Auckland dispute get a bit complicated - at its core it is incredibly simple. The union isn't making demands for better wages and conditions (and I'd support them if they did).  The Port, as the employer, demanded massive changes aimed at casualising the workforce.  The union refused to

Casualisation is a serious threat to workers' income - not knowing how many hours you're going to work each week . As this video demonstrates it also has a huge impact on workers lives.  One of the conditions port workers are trying to hold onto is the right to have one weekend off in three. 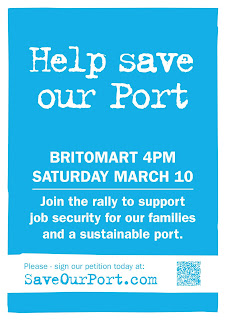 But from the employers point of view it's also about power - the employer has far more power over a casualised work-force than they do with a permanent one.

It's not over.  In shipping time is money (that's why those in charge of the Rena charted a quicker course).  There's six weeks until the redundancies can actually happen legally and all sorts of industrial action that can happen before then. And after that they'll still need people to work the port - and if they can't get scabs the containers.

So support and solidarity are incredibly important, not just for the wharfies, but for all our jobs.  The union's campaign site is saveourport.com.

Ports of Auckland are not the only major industrial action at the moment.  AFFCO (owned by the Talleys family) has locked out meatworkers across the country, they're also demanding casualisation and a roll back of wages and conditions.  Oceania rest home workers have been on  strike seeking a  pay increase (the companies offer is currently zero for the first year).

At CMP meatworkes union withstood the company's demands for lower wages and casualisation.  They received huge solidarity and support.  The employers may be on the rampage, but they can be resisted - together.