I've done quite a bit of picketing this last week.

The first picket I went on was at Bunnings. Bunnings is a hardware chain, which has recently given their CEO a 61% pay increase to six million dollars. Many of the workers at Bunnings are on the minimum wage of $11.25 an hour. After months of negotiations the company offered a 0% wage increase for a six month term (their starting offer was 0% over a three year term). As if they were asking to be made fun of the company offered a monopoly set to each worker, to go along with the 0% pay increase. 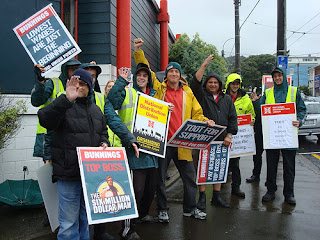 The Newtown Bunnings picket was a short picket - just an hour. There are dozens of Bunnings stores across the country, and organising in retail is hard. These short pickets are just the beginning of the fight that'll be needed to get the company off zero.

But it was a great picket to be on - for most of the workers it was the first industrial action the power they had when they worked collectively was clear. You can see the backed up trucks when the workers stopped unloading them.

The other picket line I joined this week was at the Port of Napier. In terms of union history you couldn't get two more different workplaces than retail and the waterfront. On the waterfront they have a long, proud, history of union militancy, and everyone joins the union.*

The companies don't like this strength or this militancy, so they do try and break the unions. The latest attempt at the Port of Napier came when the Stevedoring (unloading containers) contract was given to a new company called ISO. I've written about contracting out earlier this year, during the Hospital lockout

It doesn't matter where you are, contracting out works in the same way. In this case ISO were planning to use non-union, non trained workers - so all the existing workers would lose their jobs.

So the union went on strike and called a picket and shut down the port. The picket started 6am Saturday and went 24 hours a day. Four of us drove from Wellington to Napier in my little car, and we were excited about it. By the time we got to Napier we were tooting at every sign that 'Port', and when we got to the picket we tooted got mad. 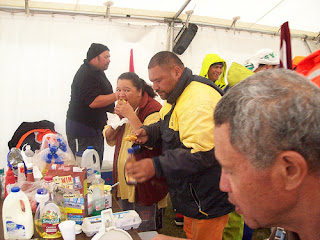 The picket was well set up, with tents, a generator, a tv, lights, a barbecue, a portaloo, signs and chairs. The workers had been picketing a long time - some were exhausted. Those on the picket line, the men and women who work on the port, women whose husbands worked the port, and kids whose parents worked the port, were going strong. It was an honour to get to hang out with them and be part of their picket.

When we left on Friday morning it was looking good. The union had gone directly to the shipowners, and most of them agreed to use union labour. By the time we got back to Wellington they'd won. All the shipowners had agreed not to use the scabs, and the port was going to abide by that. 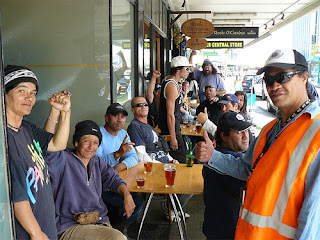 The shipowners didn't agree to this out of the goodness of their hearts - they're bosses themselves. They agreed because of international solidarity. During the dispute ships bypassed Napier port, even when the company had managed to bring in scab labour. If the ships had been loaded with scab labour there isn't a port in the world that would unload them. The International Transport Federation - the global union

The last few days have made me think about a story from the lockout last year:

The 7 year old daughter of a locked-out worker went to visit her grandmother (who worked in a nearby factory) during the grandmother's afternoon smoko. The little girl was standing on the pavement asking, and her grandmother asked what she was doing. She replied "I'm on strike, I'll wave at them and they'll toot at me, because they agree."

One thing these picket lines had in common was tooting. At Napier almost every car that drove past tooted - often not just once or twice, but continually as they drove past the picket line. The picket had been going for almost a week by the time we got there; the people of Napier had chosen a side. 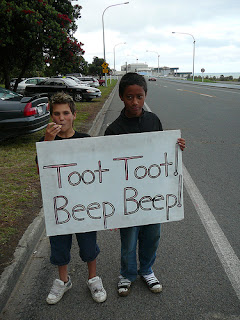 Newtown Bunnings is on a busy intersection and there was constant tooting. There are lots of unionised work places in Newtown; the buses and delivery vans all tooted as they went past and so did heaps of cars. It was raining really hard so the placards wouldn't have been that visible and the negotiations at Bunnings aen't exactly common knowledge. But it didn't matter, the people who tooted supported the picket line because they support unions.

The belief that unions don't have that much support is reasonably common. When the AA technicians were on strike even the delegate agreed with Mary Wilson that drivers would be pissed off. But when workers do go on strike, or are locked-out, then the toots and donations tell a completely different story.

In terms of union power there's not a huge amount of difference between an hour picket that delays some trucks being unloaded and day six of a picket that shuts down a port. But it's possible - making the union at Bunnings strong so the workers don't just get pay rises, but protect their jobs and change the working conditions. No workplaces, not even the waterfront start strongly union. It's hard, but it's possible.

* That long proud history involves a lot of losing - but at least they fought.