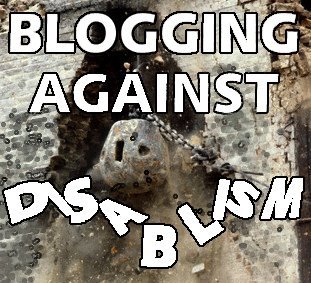 Today is Blog Against disablism day (it's also international workers day, but it's been a bit lame in New Zealand, so I'll wait until tomorrow, and immigration strike, to write about it).

I'm writing a long post about Extreme Makeover: Home Edition, capitalism and disability. But I also wanted to write something shorter about steps. I live in a city that specialises in hills, so has a lot of steps, my parents house is down three flights of stairs, and that's not particularly unusual.

In the city (where it's flatter), it's not that much better. Until recently some of the cinemas had lots of steps, and no lifts. Half the classrooms in my school had not lifts to get to them. There are cafes up steps, and shops up steps, the best place to buy music has a great big step, and no ramp. The building I work in is a union building, and has no way for people to get to the second floor, unless they do steps. The University's accomodation for disabled people was up steps (no this is not a joke).

In the past I've got into long arguments with people about the politics of steps. Or more precisely what's happening when someone who can't climb up steps can't get to a particular space. I've had this argument about political meetings, with people who don't think it matters if we hold a meeting up a flight of steps. I've had this argument about buildings, and whether or not steps are discriminatory.

I think the question is, what is stopping someone in a wheelchair attending a meeting that is held up a flight of steps? I don't think it's the person's body, and the fact that their body works in a different way from mine. I think it's the steps, and the people who decide that a flight of stairs is not a barrier.