Unless you follow pro-life blogs,* you may not have realised that pro-life New Zealand has linked a campaign called Just Think. They're super modern and aimed at youth, which you can tell because it's on facebook. Their basic campaign strategy appears to be women are quite dim and don't realise that if they don't have an abortion they'll have a baby.** You think I'm kidding? This is their poster: 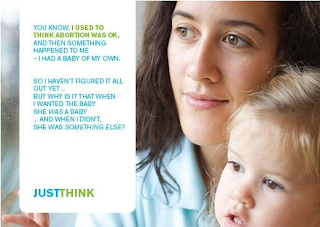 [Text: You know, I used to think abortion was ok, and then something happened to me - I had a baby of my own.  So I haven't figured it all out yet... but why is that when I wanted a baby she was a baby...and when I didn't, she was something else?]

You'll notice that even in the text of an anti abortion poster a woman isn't allowed to be articulate enough to explain that she's anti-abortion.  It's just that babies and pregnancy confuse her.

On one level it's just a terrible, terrible poster, but I think it is also quite revealing about one of the conundrums of being 'pro-life' (heavy sarcastic quote marks).

30-60% of New Zealand women get an abortion (I've heard both figures - the lower one from more reliable sources -  either demonstrates my point).  If you believe that abortion is murder (which pro-lifers probably don't - but say that they do) then that figure is horrific.  You either have to believe that thirty per cent of women are murderers.  Or say "They know not what they do."

And because outright misogyny is damn unattractive, often even to other misogynists, pro-lifers chose to portray women as incapable of thought.  It's not that we're choosing to have have abortions - it's that we're being tricked and are too stupid to know what an abortion is.

The pro-choice position reflects the reality of women's lives: the number of women who have abortions, the fact that political belief about abortion is not a good predictor of willingness to have an abortion and the necessity of abortion for people who are pregnant and don't want to be.   Anti-abortionists won't even portray women as capable of making the decision to be anti-abortion.  We believe that women (and other pregnant people) are the best people to make decisions in their own lives.

* I do it so you don't have to - and also because Andy Moore's youtube channel
has to be seen to be believed.

** I'm using 'women' t deliberately in this case to describe how they see their target audience.