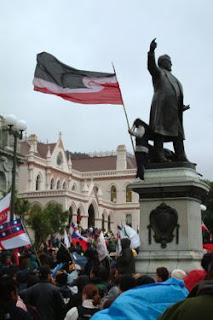 I had such good intentions. Te Ata Tino Toa called for 5 days of Tino and invited people to fly flags from 1-5 February. I was going to fly the flag on this blog, by writing a post for each day. I even knew what some of those posts were going to be about. Well, obviously I failed.

So I'm just going to talk about the Tino Rangatiratanga flags I saw flying today. None of them were this big, but I saw flags on flagpoles, flying out of cars, and down in Waitangi park.

A group of us walked from Waitangi Park to the Mt Cook Police Barracks and we were carrying flags. What surprised me, and it shouldn't have, was how much tooting there was. Buckle st is busy (thanks to the by-pass), and heaps of the cars going past were tooting - supporting the flags we were flying.

To be surprised, I must have bought into the media's idea about the level of hostility to Tino Rangatiratanga. But, by standing by that flag I realised I was wrong.

It was a small action, and not much more would have come of it than the fact that people saw our flags and tooted. To me, that shows the importance of what Te Ata Tino Toa were calling for. By rallying to the standard of the Tino Rangatiratanga, we discover that there were more with us than we thought.