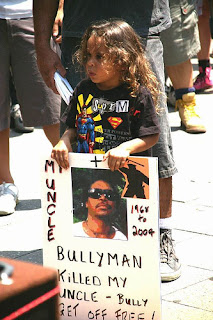 Chris Hurley is a police officer, who arrested Mulrunji Doomadgee for 'Drunk and Disorderly Behaviour' - the criminality of being drunk often depends on the colour of your skin. How you get treated when you get arrested also depends on the colour of your skin. There was Royal Commission on Aboriginal Deaths in Custody in 1991, but 13 years later the recommendations had been ignored and Mulrunji Doomadgee died.

In police custody, he suffered four broken ribs, a ruptured spleen and a his liver was almost split in half.

On Wednesday the jury found Chris Hurley not guilty.

Mulrunji's death is a horrific, but it's just one of daily crimes against indigenous Australians. His arrest, his beating - they happen every day. The theft of land is what Australia is based on.

Then, yesterday, supposedly to protect children for sexual abuse the government announced a package of direct attacks on indigenous people. Most of which, like market rents, benefits, and land thefts - are simply neo-liberal attacks on people's basic subsistence.