I was so excited

I'd like to apologise about the amount I seem to be writing about the Buffy Season 8 comic book. Yes, I'm an obsessed fangirl, but it's mostly becaue comics are a new medium to me. I find the sexism in comics new and kind of shocking, so I will be writing more about it than anyone wants to know.

So this is the cover of the third Buffy comic book: 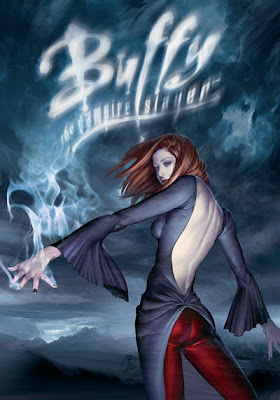 That's supposed to be Willow - who has grown a foot, had breast implants and stole Buffy's pants. She has also apparently spent the years since we saw her last searching out the single most impractical garment ever made to wear as a top.

Bah - I was so excited about season 8, but I'm not sure I can take it if every female character is drawn for men.