The tale of another protest 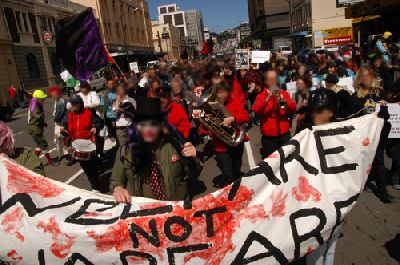 Different people observe the changing seasons in different ways. For gardeners spring means planting things, for sports fans it means the beginning of the cricket season,* for students spring means avoiding studying for exams, and for Wellington activists spring is celebrated by protesting the conference of the New Zealand Defence Industry Association.

Every year the New Zealand Defence Industry Association holds a forum. To quote from their website:

Isn't nice that they manage to leave off references to the purpose of the 'defence' industry is to kill people, and the current wars.

Now obviously on a global scale New Zealand arms trade is insignificant. One of the members of the NZDIA makes grenates in his garage. But that doesn't make them any less repsonsible for the products they produce. Rakon (while not part of NZDIA), is the most used example of a New Zealand company that makes products to kill people. Their GPS crystals are used in US made Smart bombs, some of which were dropped on Palestine and Lebanon this year (more here.

For the last few years the Defence industry has been held at Te Papa (New Zealand's national museum. This has angered some people even more - Te Papa's branding is 'Our Place.** The Defence Industry conference has become one of the focal points of peace organisation, the other being the war against Iraq. Organising against the New Zealand defence industry brings the links between capitalism and war home.

I've been protesting the defence industry conference since 2001. I have to admit that I haven't had a huge amount of enthusiasm for the protests for the last few years. You organise small protests at things year after year, and in the end you just don't have the energy to do it again.

So I can say that yesterday's protest was truly fantastic without blowing my own trumpet (all I did was turn up).

The police were really worried about protesters and had put up blockades all around Te Papa. This made it really easy for protesters outside each entrance to stop those going to the conference getting in or out. There were over 200 people there for most of the afternoon (people came and went), and every entrance to Te Papa was blockaded 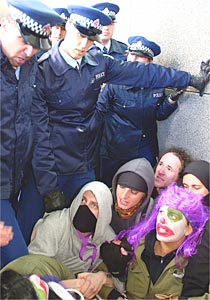 In order for this to work the police closed the museum for the afternoon. Which shows where the priorities are, it's more important that the weapons conference goes ahead than that people can actually use the museum.

What was really amazing about the protests was that no-one got arrested. The trick at a protest is to know your strength. The vast majority of people who have been arrested on protests I've been at have got off - they hadn't done anything wrong. But police arrest people on protests because they can - if the crowd is big enough they don't arrest anyone because it'll just make more trouble. It's often really hard to judge your strength - I'm always very cautious. But this time people knew exactly when to back down - when we were weakening. It was an incredibly well organised and effective action.

*Or not - I could be wrong about either of these facts, since I know slightly more about sports than I do about gardening.

** Personally I don't think it matters that much where it's held and I occasionally find the arguments against it being held at Te Papa a little bit precious. It's not like the museum doesn't have problems of its own: Women? Kind of absent. Work and the people who do it? Not so much. Struggle over these things? Five minutes in one film.