Down with Practically Everything 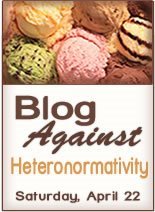 I decided to post the post I'd already written anyway. I'm writing about female friendships, and even if I'm not convinced I'm talking about heteronormativity, I think it's an interesting topic of discussion.

I have two female friends who are raising a baby together. They've never slept together. They were friends and flatmates before the baby was born, and now they're looking after him together. It's not easy, for many reasons (not least of which is the general lack of sleep and stress that comes from looking after an 8 month old), but part it is our very limited idea of the roles involved in raising a child.

A few years ago my best friend had a double hip replacement, it didn't go well. She was allergic to various pain-killers. One hip got infected. She was in hospital for five weeks, when they'd originally said she'd be in for a week to ten days. I visited her almost every day, and it's so draining to see someone you love that sick.

But a lot of people just didn't get it. She was 'just' a friend. If I'd slept with her, even if I'd only known her for a few months, my reaction would have made more sense to them. Instead I was being nice and kind.

Under the Holidays Act you get 3 days' paid bereavement leave on the death of a set of named people, parents, children, siblings, grandparents, grandchildren, spouse and spouses parents. For a friend you can get one day's paid leave if your employer accepts a bereavement.

Our society does not value, or even really recognise friendships, particularly friendships between women.

It hasn't always been like this. People have critiqued Carroll Smith-Rosenburg's 'The Female World of Love and Ritual' quite throughly since it came out, but it does show places where it was socially acceptable to value relationships with your female friendships as much as your relationship with your husband.

I don't have any solutions to this, at least not right now. While forming strong relationships with women is a fantastic thing to do, it'll make your life better, and you'll feel stronger, having them doesn't change the fact that society doesn't value them. My friends' relationship challenges ideas about what relationships can be, but it isn't easy for them.

But what I want to try and look at is why female friendships are devalued, in what context the priviledging of certain sorts of relationships happens, and who benefits.

A couple of days ago I was talking about Homosociality:

I agree with this analysis. Men are supposed to put other men over women. But even with men, this isn't about valuing those friendships and relationships as individual people, but valuing men over women, becuase they are men.

*Obviously lesbians do subvert the underlying idea of valuing men over women. But this doesn't mean that they stop valuing sexual relationships over other relationships, this norm is particularly pervasive.