What can they do to you? Whatever they want* 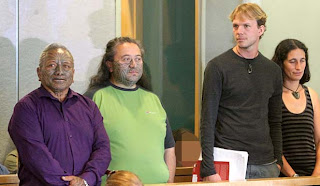 You don't need to have been following the trial, or even have heard the verdict, to be able to guess which of the people in this picture were sentenced to two years six months in jail and which were sentenced to 9 months home detention.  Pakeha fears about Maori have been projected onto accused throughout the whole case. I've no reason to disbelieve that Andre, who commented on Public Address, is not who he says he is:


I was excluded from the jury for the trial along with two other jurors after being empanelled. I gave them all a rant prior to departing and am relieved they didn’t find them guilty on the main charge. They were overwhelmingly middle class white women that I left on the panel, some of whom had already told us that Tame Iti scared them etc. One of the jurors asked to be excluded because she was convinced he was guilty by how he looked. She was refused her request to leave and heard the case. Another guy asked to be excluded because he thought the whole exercise was a waste of taxpayer money and resources and he was excluded. How does that work?

One way of communicating my range and anger over the sentences is to talk about how manifestly unjust they are on the court's own terms.  This man who beat and pretended to hang his children, received a sentence of two years 8 months.

As others have pointed out Rodney Hansen, the judge sentenced them as if the charge of being part of an organised criminal group (which the jury could not decide upon) had been proved.  He included the defendant's political views as aggravating factors stating: "Some of the participants held extreme anarchist views."  He blamed the defendants for the actions of the police - stating that they had done harm by creating divisions within Tuhoe.

The logic of the judge's sentencing was grotesque.  Justice was far from blind - it saw and was terrified of who these people were and sentenced them accordingly.

The sentence is unjust when understood inside the system of justice that colonisation brought.  But to focus on that is to ignore the larger injustice. 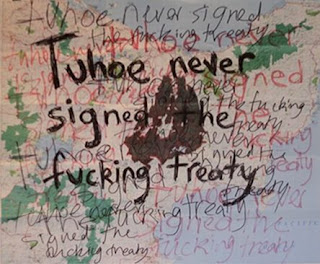 Justice Hansen is not the first judge to exert his authority over Tuhoe people as a way of trying maintain the crown's sovereignty over Tuhoe land, unfortunately it's unlikely that he'll be the last.  He was very willing to describe the actions he'd decided people had undertaken as 'a frightening prospect undermining our democratic institutions and anathema to society'.  He talked of 'we' and 'our' and 'society' singular.  He ignored the many actions of the crown that had undermined Maori democratic institutions and that were an anathema to Maori societies.What right do Pakeha from Auckland have to talk of 'we' and 'our' when it comes to Tuhoe land?  They can't even claim the right of Kawanatanga.

Protests have been organised around the country over the next couple of days.  Come along if you can - thinking that this is wrong is meaningless without action.

* I found some comfort in Marge Piercy's The Low Road tonight - not for the first time.

** I've seen a lot of people express this idea in a way that implies that Rangi and Tame are more Maori than Emily. Sometimes this is because of lack of knowledge, but it is wrong.