With our brothers and our sisters in many far off lands

I don't really use twitter, but every so often I get mesmerized by a hash tag. Tonight it was #J30 and #isupportthestrikes (with an occasional check out @Ed_Milliband - just to enjoy the many ways to say "fuck off"). A large chunk of British teachers and public servants are out on strike. Schools, courts and benefit centres are shut all over the place, and there are rallies and marches across the country. There are really awesome connections between struggles, with those protesting benefit cuts, joining the picket lines of the people who work in job centres.

Everytime people chant "The Workers United Will Never Be Defeated" in Wellington there are about 25 people there. I always make the same joke: "I agree with the general principle, but don't see it's application here. But when you've got more than half a million people out I think it's fully justified (although the workers aren't quite united, who is on strike and who isn't seems super complicated and doesn't make any sense to me). 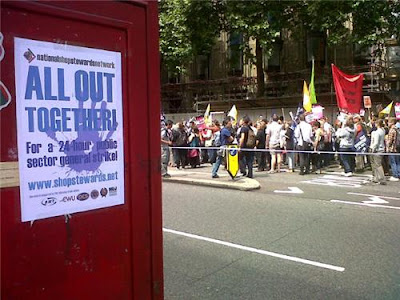 The picture is from Elephant the best site I've found for live reports.

Of course Britain is not the only far off land in upheaval (The Daily Telegraph had a headline "Strikers Should Learn From Greece" - a sentiment I wholeheartedly agree with, although I suspect we mean slightly different things). It is the easiest one to find good info in a language that I speak though. I'd welcome links in the comments. libcom did have good info from Greece, but it hasn't been updated in a while.