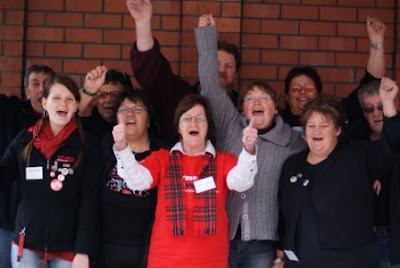 Yesterday the Court of Appeal upheld the SFWU & PSA case against IDEA Services - more usually known as the 'sleepover case'.

For those who haven't been following it - across the country there are residential houses, which offer around the clock care for people who need for disability or mental health reasons. These are funded (or rather underfunded) by the government. At the moment, the caregivers in these houses are paid what are called 'sleep-over rates' overnight. IDEA Services pays its works $34 for a 9 hour shift. This is obviously well below the minimum wage.

The unions involved took a case in 2007 to argue that workers should be paid the minimum wage. They won in the Employment court, and have now won in the court of appeal. Consistently the courts have found that since the workers have to be there then it is work (I could have told them that for free, but oh well) and should have been paid the minimum wage (for more information see the Service and Food Workers Union website - which is where I got the picture from).

I think this is one of the most important active feminist struggles in New Zealand at the moment. New Zealand feminists have been fighting for equal pay for equal work for a very long time. And we haven't won yet jobs that are preformed by women are consistently judged of less worth than jobs that are performed by men.

And this is a classical example: jobs that are dominated by men, Doctors, Firefighters, and ambulance officers, all get paid far more than minimum wage and are able to sleep on the job. Whereas disability service workers are mostly women, so they're not even working.

However, unfortunately victory in the courts may not deliver either backpay or a new. The IHC has made preparations to go bankrupt if they have to pay the money. Unless the government, which is the funder of services and so was, and has been, complicit in this whole thing. The government has also indicated that it would be prepared to change the law specifically to stop the payment of minimum wage over sleep overs (it's willing to make exceptions to the labour law for itself, as well as film studios).

So it's important not to just rely on the courts to make this change, but to actively support the workers in their struggle to get the very most basic wages and conditions.