No More Jumping Through Hoops: A Belated Demo Report 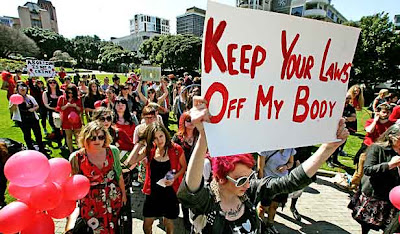 Last Tuesday was a fabulous day for feminism in Wellington. Action for Abortion Rights organised a protest outside the Appeal Court. When we were planning the demo we were thinking about something that might only have twenty people there. Not because we didn't think people cared about abortion rights, but because we had no idea if we could find and mobilise those people.

I've been an activist for a long time, and I've organised a lot of demos. But this demo was something else. There was so much energy and enthusiasm - and so much excitement that we were able to do something about an issue which meant so much. The papers said we had 50 people at the demo - but it was easily three or four times that. 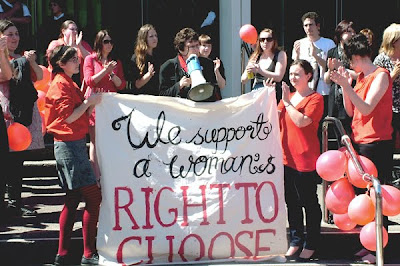 Rebecca from Mothers for Choice gave a great speech:

We have a very strong message for the Right to Life brigade – not only do you not own women’s bodies, you don’t own families. Your ilk has spoken on behalf of families for too long. Most people in most families want a decent law that means everyone who needs an abortion can get one, without having to make the kind of case necessary under current law.

My daughter is four. I hate the thought that when she is older, she would have to jump through hoops to get an abortion if she had an unwanted pregnancy. I don’t want any more women to have to do so. The time is long overdue for the law we need, and together we are going to make sure it happens.

Ally Garrett, of I'm Offended Because, lead us all in a round of chanting "Hey, Hey, Mister, Mister, Keep Your Laws off Your Sister" dedicated to Peter Carlisle. Check out her amazing blog post which explains why Peter Carlisle deserves special chants towards him. (Also she has the best blog title ever - I'm super jealous).

We also had some great speakers from Action for Abortion Rights, the Women's Studies Association, Women's National Abortion Action Committee, Abortion Law Reform Association, and young labour came out against their parties refusal to allow Steve Chadwick to put the bill in the ballot.

Then we headed to parliament - because parliament, not the courts, are responsible for the current laws. 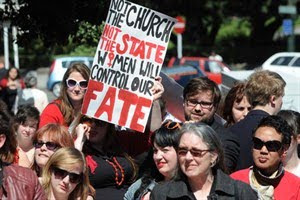 We had chalk so people could leave messages at parliament: 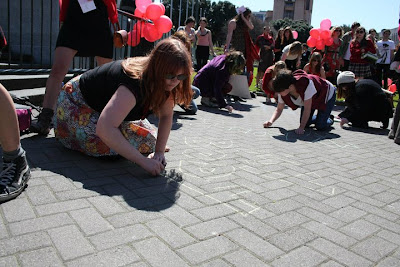 The current abortion law requires that women jump through hoops to get access to abortion. Right to Life want those laws to be higher and smaller. That's why we called our demo No More Jumping Trough Hoops - and did some hoop jumping: 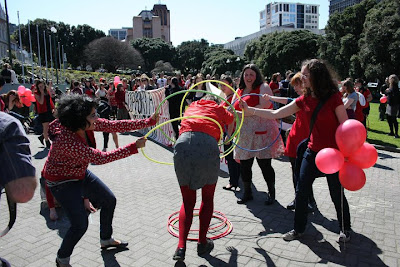 As an added bonus pro-life NZ recorded our demo and put it up on youtube. So even those of you who weren't there can see it. Aren't they considerate:

This was just the beginning. Things are full steam ahead in Wellington. I'm sure there just as many people in other areas who are keen to be part of the fight.

Photos of this protest come from John Darroch and Stuff.