Today on the picketline in Wellington 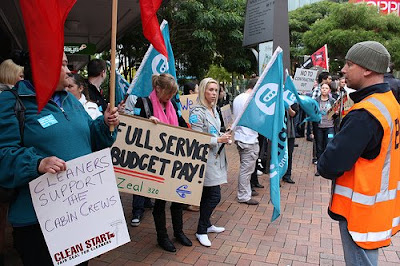 The Wellington picked to support the Zeal workers was help outside the AirNZ holiday shop (the photos in the post are from the EPMU).

All the workers I talked to were on strike for the first time. They came up and said thank you for coming when I arrived. They had painted a wide selection of placards and gave me one to hold. As the day went on the young women (most of the striking workers were young women) got more confident on the megaphone. Theoretically I know that strikes can give workers strength and confidence. But it's always more true when you watch it happening.

The picket was well-attended 40-50 (probably more because people came and went) of many of the usual suspects - unionists and political radicals. But the support was much wider than that. Not just tooting either: 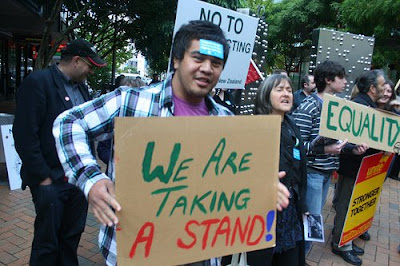 I watched this guy join the picket, and I'm pretty sure that he was just passing by (although I wasn't close enough to hear the conversation, so I can't be sure). He wasn't the only one who stopped, talked and stayed a while to show his support.

It was particularly good to see non-Zeal Air New Zealand workers on the picket line. As I said yesterday, what Air New Zealand is doing with Zeal is a threat to all workers' wages and conditions.

There is still no bank account details for lock-out donations, although EPMU are trying to get an 0900 set up. When they get it up the details will be here. On such low wages many of the workers won't have a buffer, anything you can give will help them stay strong, and win this fight.