Two friends of mine have gone to Tonga for Indymedia. I'm going to be posting their reports. Smush wrote the words and Sln took the pictures.

Nuku’alofa (Tonga) – We, two indymedia (www.indymedia.org.nz) activists, arrived at Fua’amato International Airport early on Friday morning from Aotearoa. After leaving the plane we had to walk to the arrival hall past three Tongan soldiers, two of which were carrying large rifles and the other a hand gun. A police officer walked around with his dog while people where waiting at the immigration desks. More members of the Tongan Defense Force (TDF), armed and in camouflage gear, stood around in the arrival hall. On our way into town we past a military checkpoint at the turn-off to the airport. They didn’t pull us over and we drove the 20kms into the city.
Click on image for a larger version 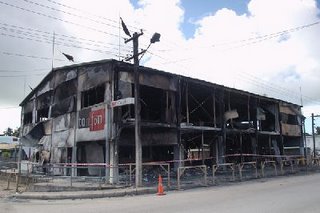 Tonfön destroyed
In the morning we made contact with members of the Friendly Island Human Rights and Democracy Movement (FIHRDM) and arranged to meet up later. In the interim we went for a two hour walk through Nuku’alofa. On our way towards the city we came across a building which was completely destroyed from Thursday’s fires. It was the headquarters of Tonfön, a telecommunication company owned by the royal family.

Checkpoints
Just before entering the city centre, across from the Royal Tombs, a military checkpoint is set up. In fact, the whole city centre is cordoned off by roadblocks on every street. Only people who work or live inside the area can enter. You have to be on a list in order to pass. Each checkpoint constitutes off a set of barricades to stop cars with spikes on the ground. There are between two and eight soldiers on guard at each checkpoint. The bigger checkpoints have Tongan and Australian soldiers. The Australian soldiers moved into town on Saturday for guard duty. We counted approximately 12 roadblocks in central Nuku’alofa. The Tongan TV station, which is out of the city centre, is also closed by army personnel of which two are from Australia. “We do what the Tongan government tells us” said one of them.

Interviews
We then had the opportunity to interview five people who are involved in the democracy movement: Finau Tutone, an organiser with the Friendly Island Teachers Association; Akenete T. Lauti, the director of FIHRDM; 'Akilisi Pohiva and Leopolo Taonesila, both Members of Parliament (two of the nine representatives elected by the people – in a parliament of 30); and Tevita Tui Uata of the National Tongan Business Association.

Very quick summary:
Finau talked about last year’s strike and the connection between the trade union movement and the pro-democracy movement. He said the system needs to change in Tonga. Akenete informed us about the FIHRDM’s activities. They organise workshops and meeting to educate people on human rights issues. While she advocates for non-violence, she does not blame the people but the Government for Thursday’s riots. 'Akilisi put the movement into a historical context and talked about the progress, or lack of, made inside parliament. Leopolo is one of only two women in parliament (the other one being the Minister of Justice – appointed by the King). She only started to get involved in politics last year when she was elected to parliament as a people’s representative from an outer island. Tevita, who has been blamed for the riots, thinks that representative democracy will get Tonga out of a system that only works for 1% of the population. He was strongly opposed to Tonga joining the World Trade Organisation and says that the wealth needs to be shared more equally among the people.

NZ/OZ soldiers – get out (or “enjoy your holiday”)!
With the exception of Tevita, all of the people we spoke to either do not see the point of the New Zealand and Australian troops’ presence or see them as supporters of the autocratic system. Either way, they want them out of Tonga. The NZ soldiers are not to be seen in Nuku’alofa (they are still somewhere at the airport) and the Australian troops do not seem to do much at all except for sitting around at checkpoints with big guns. Pro-democracy advocates are very critical of NZ support for the government. They say the NZ government should be neutral and not send soldiers to support the system. 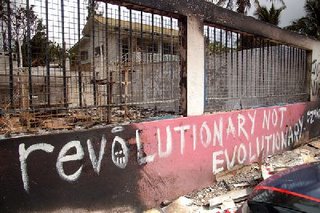 Revolutionary not Evolutionary
Many shops have slogans painted on them. Across from the market, someone wrote “THE NU FACE OF YOUTH REBELLION” and “REVOLUTIONARY NOT EVOLUTIONARY” on a burnt-out shop. Other slogans are “Freedomfighter”, “Fight the Power”, “Democracy not Hypocrisy”, “You had it coming” and “Fuck Prime Minister”. Many of them are signed by ‘Ezekiel’.

Police checkpoints
The police have set up two checkpoints on both sides of town. They pull most cars over and search the boot. We were told they are looking for weapons and stolen goods. They say it is illegal for people to carry weapons and they claim to have confiscated eight .22 riffles over the last few days.

Army guards the King’s residence
We walked to the King’s mansion which is guarded by four Tongan soldiers. The huge house is around 300 meters off the road. While taking photos a black SUV left the premises and the gate was opened for a few seconds. One of the soldiers was prepared to say a few words on camera. He said he does not want democracy in Tonga, he wants peace.

Marching band practice
On our way back into town we stopped at a high-school where a marching band was practicing. Over 50 young men were playing in the band which includes tubas, trombones, trumpets and a percussion section. Everybody is incredibly welcoming and keen to talk about politics. Everybody we talk to wants change here in Tonga. People are sick and tired of living in this system where 1% of the population lives in luxury on the expense of everybody else.